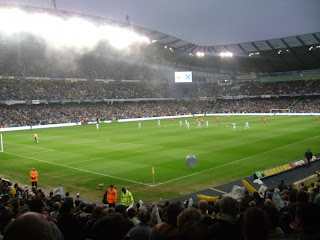 What a night Thursday proved to be. With an incredible party atmosphere inside Eastlands, City gave it their all and certainly had the chances to go through on the night. Elano was in inspired form and definitely influenced the tempo on the pitch. Felipe Caicedo was guilty of missing a gifted chance but on the night I was personally very proud of being a blue.

We may have gone out of the UEFA Cup but every City fan can hold their head up high and be safe in the knowledge that the team did give it their best shot. The atmosphere was electric and even Martin Jol admitted that the noise and energy around the stadium shocked his Hamburg side. That is what City fans are capable of, so why isn't it replicated on a regular basis?

Also, a quick note must go to the fact that Mark Hughes didn't hold a training session on the day of the UEFA Cup game and apparently wasn't in contact with any of his players until they arrived at the ground for the actual game...for me I would have to question certain elements of this and whether his motivation and personal treatment of players are appropriate. Not talking or communicating with the players until match-day is a recipe for disaster. A manager should build a relationship with his players. But now City must look to the future and potentially qualifying for the Europa League next season.