TONY COTON EXCLUSIVE INTERVIEW
"The fact is I didn't want to leave. City wanted me out of the club." 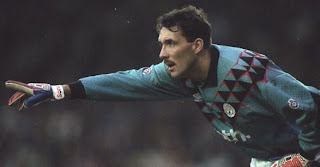 He was loved at Manchester City but hated for his move across the City to United. In an exclusive interview, former goal-keeper Tony Coton speaks candidly about what really went on behind the scenes at Maine Road and how football has influenced his life.

Interviewing Tony Coton is something that Footy Pundette is relishing. It’s not very often that a footballer, or a goal-keeper in this case, has the balls to move between rivals clubs, but that is exactly what Tony did. The aftermath of such a move is that Tony is still despised by a large majority of City fans that saw his move as being motivated by greed. Just what is the truth? I headed to Tony’s new office, near City’s training ground in Carrington, Manchester, to find out.

As soon as I arrive, I am greeted by a cheerful and friendly Tony; he is much taller than anticipated and speaks with a strong Black Country accent, offering me a cup of tea straight away. He invites me into his office; the front room of the Victorian house is littered with sporting memorabilia. Behind his huge desk is an even bigger picture of Manchester United from the 1999 European Cup Final. Signed shirts from Ronaldinho and Pat Jennings also feature and opposite his desk is a large plasma television blasting out the familiar Sky Sports News theme tune. Before I get started I read through the questions, expecting Tony to refuse to answer some of the more probing ones. But he accepts every single one on the list and gets comfy for what will be a grilling for the Tamworth-born goal-keeper...

FP: Given that, in 1991-92 and 1993-94 seasons you won City's player of the year awards, did you understand what effect moving to the other side of the city would have on City fans that held you in such high regard?

TC: No. I remember when I first came to the club having a bad time with the fans. It took me a while to settle in and I got a bit of stick replacing Andy Dibble. At that time I didn't think I would ever win them over.

But it's amazing how things change and only performances on the pitch can determine that. So after winning those awards and winning the fans over, in 1996 when I eventually moved over the city I thought there would be a bit of response from the City fans. But not to the certain extent of the faxes and things that got sent to City. But I've often said that City wanted me out of the club. I didn't want to leave the club. Francis Lee and Alan Ball wanted me to leave. Consequently, along with Keith Curle, Niall Quinn, Garry Flitcroft, who all seemed to follow in succession. I didn't think I'd get the reaction that I got, especially if City fans would have known the facts. The fact was I didn't want to leave. City wanted me out of the club. 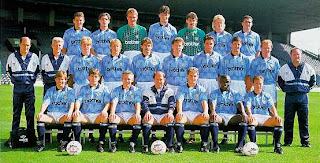 FP: Which manager did you enjoy playing under the most at City?

TC: Two really, Peter Reid and Brian Horton. Brian Horton was a fantastic man and what I call a friend now. He was very good with the players and I think he was harshly treated by the regime then. Obviously Francis Lee wanted his own man in Alan Ball, and I just don't think that he gave Brian credit for what he was trying to do there. Then Peter Reid, who took over from Howard Kendall, I got on well with him on a professional basis. That's why I signed for him at Sunderland later.

FP: When you left City you were allegedly quoted as saying that you would have a better chance of first team football at United. Is that true, considering that Eike Immel was City's goalkeeper and Peter Schmeichel was United's?

TC: No it's not true at all. I never ever made that comment. I knew exactly what I was moving to. I met with Alex Ferguson and he told me exactly what my role would be; to be number two to Peter Schmeichel. I'd join in the January, and one thing he said, although I signed a three-year contract, one thing he said is that if I still had ambitions of playing in the first team like every professional has, then he would listen to offers in the summer. That's exactly what happened. I went in the January.

I thought, let’s see in the short-term, let’s have a look at see what Man United are all about. Is it any different to any other club? That's the reason I went, and I knew I'd be leaving again in the summer. I was going for a short period of time. If I'm being perfectly honest, I went for the money. I went for the pay day. City wanted me out, United were going to pay me well, going to give me a signing-on fee. I'd still get the experience of being at United and having a ball. I knew I'd be going in the summer anyway, I was either going to join Sunderland (which I did), Wolves or Derby.

FP: During the so-called 'dark days' at City, how bad did it actually get?

TC: The dark days for me, and I don't like to speak ill of anyone who has passed away, but for the dark days for me happened when Francis Lee took over as chairman and Alan Ball came into the club as manager. I still feel that Alan Ball was brought in to be a puppet for Francis Lee, as proven on more than one occasion. So from the day that Francis Lee and Alan Ball came in, I didn't know at the time but my days were well and truly numbered. It's very difficult when you have been a regular in the time, and you are fit. Also they brought in a German goalkeeper, and this is no disrespect to Eike Immel, but he suddenly came in overnight. Nobody knew about it and everybodys suddenly looking at me saying 'you're not going to be in the team'. Nobody had the decency to tell me that they were bringing in another 'keeper. I didn't think I deserved that.

I went in to see the manager; he was sat there reading the Racing Post with his feet up on the desk.
I said: 'Look, you have bought a new 'keeper here, you have been quoted as saying that he's the number one. Does that mean I'm going to be transferred?'
He said: 'Oh I've been meaning to speak to you about that. Yes. We're going to keep the fee down as a goodwill gesture and we're listening to offers. I might do a swap deal with the left-back at Sunderland'.
I said: 'I don't want to go to Sunderland'.
As it turned out I did end up going to Sunderland in the summer, but not in a swap deal for him. So for me, the dark days were when those two came into the club. It was bad.


FP: Do you agree with Robinho that the mentality of the club has got to change if the club is to be successful?

TC: If you play sports at whatever level, whenever you do anything you should always strive to be the best at whatever you do. Whenever you play in any competition you should always want to win. I'm often chastised at home because I won't let anybody win at anything and it's just the mentality you have. I think if you are a professional and getting paid for it, you should automatically have that mentality anyway. Maybe it's Robinho being a bit temperamental and trying to get the lads at it. He's obviously trying to get a reaction from his team-mates, but sometimes when you say the things you say it can have a reverse effect. It can have a negative effect. But every time you play you should have a winning mentality. I don't know what he's trying to get at.

FP: Do you think United, and Alex Ferguson, will ever regard City as a real threat?

TC: I know that they try and class the derby game as just another game, but I know what it means to them. How badly they hurt when City beat them and I know how pleased they are when they beat City. As a threat, whether the threat is in Alex Ferguson's reign as manager of United, I don't think so. I think he will be retired by the time the real threat comes. I think he has been quoted as saying he will be there for another 18 months, I don't think the threat will be in that time period.

In the concluding part of the interview next week, Tony speaks exclusively about his heroes, his motivations, his career in general and his England disappointment, City’s history and future and reveals more truths about his time at City.