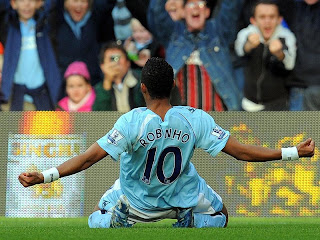 Robinho broke his goal drought in spectacular style with a sublime volley to fire City ahead during the club's 4-2 thriller against West Bromwich Albion.


The Brazilian hadn't scored this year until a pinpoint cross from Stephen Ireland fell to his feet. Robinho struck the ball immediately- and his crisp volley fired into the back of the net to give City the lead.


Nedum Onuoha's header from a corner made it 2-0 before Chris Brunt pulled one back for the relegation-threated visitors just before the interval.


Brunt struck again just after the break to level the match but almost immediately Elano scored from a penalty to gave City the advantage again.


The Baggies were desperate to get back in the game and pushed forward for an equaliser, but their attacking left them exposed at the back. Substitute Daniel Sturridge made the three points certain for City in injury time with a tap in goal.

The score-line flattered City during a game where some of Mark Hughes' blues looked lethargic and, at times, very sloppy. Wayne Bridge and Richard Dunne were exposed regularly and a couple of times Dunne was forced to make last-ditch tackles to make up for his earlier errors. Even Vincent Kompany seemed out-of-sorts and consistently surrendered possession.


City's main threat came from their creative players. The likes of Ireland, Robinho and Elano looked lively and, during various attacks in the game, a potent threat. Ireland's work-rate is tireless; always searching for an opening or an opportunity, he always gives the team options and is a huge influence in the middle of the park.


Robinho looks to be finding his form again after a damp squib and his fellow country-man Elano hit the spot again with a penalty.


West Brom deserve credit though- they worked constantly to add pressure and expose City's weaknesses. The score-line wasn't really a fair reflection of the game and Tony Mowbray will feel aggrieved to be going back to the Hawthorns empty-handed. But the visitors did have plenty of chances to score, with poor finishing letting them down. Any chances created needed to be taken- and they wasn't.


After the Hamburg game on Thursday, this was always going to be a bit of an anti-climax. But in reality the game turned out to be a bit of a thriller, despite City looking lacklustre and very tired in the final quarter. Martin Petrov had another appearance in the second half and looked a threat with his lightning-fast late charge during the final 10 minutes. Perhaps with a bit of match fitness and confidence he would have buried his chance. Sturridge got on the score-sheet again but didn't celebrate his goal, maybe suggesting that his future lies elsewhere after recent contract talks had stalled.


With City four points behind West Ham in the race for the final spot for Europe, the run-in will now be very interesting. City's next game, against Everton on Saturday, will prove crucial if Hughes' men are to qualify. They will have to overcome a sustained bout of travel sickness if they are to pick up anything from Goodison Park against a David Moyes' side that are still riding on a euphoric tidal wave having just secured an F.A. Cup Final spot and virtually cemented their place in Europe next season. It will be a very intriguing 90 minutes of football between the blues that's for sure.