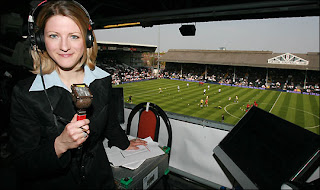 Footy Pundette meets the first lady of female commentating and talks about how football not only dominates her life but how the beautiful game made her take a gamble and change careers.

It’s not every day that Footy Pundette meets a figure that has caused so much controversy. Since becoming the first female commentator on Match of the Day on 21st April 2007, Jacqui Oatley has created quite a stir. The negative reaction to her debut was so strong that social networking site Facebook was inundated with anti-Jacqui groups filled with sexist and derogatory remarks belittling her persona and ability.

To deal with thousands of people judging and mocking your capabilities based mainly on your gender would require Jacqui to have skin as thick as a rhino it would seem. Surely that level of abuse and criticism would take its toll on the person it is carelessly aimed at. Footy Pundette headed to BBC Television Centre in West London, armed with intriguing questions, ready to meet the woman behind the microphone.

When Jacqui greets me at reception she is cheery and polite, offering a handshake and a warm, welcoming smile. She is dressed casual in jeans and a lemon vest top and immediately engages in conversation regarding my journey whilst en route to the Match of the Day studio, the location of our interview. The first impression given is one of a woman that is both confident and intelligent and simply loves football, whether it is following her own team Wolverhampton Wanderers or when she used to play amateur football, it is clear to see that football has a massive influence on Jacqui’s life.

Footy Pundette wastes no time in broaching the subject of social networking sites and the possibilities of gender equality in football. As Jacqui settles on the famous white sofa we immediately mention the amount of facebook abuse that is aimed in her direction. Her reaction is a mixture of cringing and laughing.
“I discovered it completely by accident,” Jacqui admits. “I was on holiday in Hollywood, by the pool having a really nice time sunning myself and emailing friends and I got a friendship request from somebody with the same surname as me who I didn’t know.

“This made me put the surname in to look for other family members who I haven’t been in touch with for a while. I innocently put my surname in and...”

At this point Jacqui pauses, rolls her eyes and lets out an almost nervous laughter.

“I just didn’t expect what came up. It was utter bile, I mean really nasty stuff. I was gobsmacked. I told my friend and pointed it out to her. That’s not nice, I was on holiday and I hadn’t expected it. I wasn’t braced for it. But at the same time I know it’s out there.

“The last thing you can do is look at it, read it, take any notice of it. You can’t do otherwise you would never leave the house, you would be so miserable. You would spend all your life thinking everybody hates you, it’s disproportionate. All you can do is do the very best you can at your job. As long as you’re happy with yourself that’s all that matters.

“I don’t think there will ever be gender equality in that sense. Historically football is a men’s game but that is changing. More women are watching football and playing football than ever. I think the people who grow up with mums, sisters, girlfriends, any kind of females around them who are genuinely into football and knowledgeable about the game will be more accepting of a female sports journalist than people who haven’t. It won’t happen overnight but we are getting there.”

Jacqui was born in Codsall, Staffordshire and grew up with an unconditional love of football. She went to university and gained a degree in German then lived in London as a sales and marketing manager.

But football has always played a major part in her life and her heart. She has followed her team, Wolverhampton Wanderers, for years and played football for Chiswick Ladies Football Club, before an injury forced her into having reconstructive surgery and almost a year on crutches. The injury would prove to have a major influence in her life and future career choices.

“Playing football was something I did because I absolutely loved it,” Jacqui enthuses.

“I loved playing football, I love watching football. Unfortunately I just had to stick with the watching after the injury. I used to play every Sunday as well as go to watch my team home and away every Saturday.

“As soon as I got the injury I thought that there was something missing, that I needed to add some kind of football to my life where I lost it. I used to listen to BBC Radio Five Live all the time, for years, and I thought that a degree in journalism would be perfect. So I decided to go back to university and retrain from scratch.

“I gave up everything. I gave up a good job and my flat and stayed on my friend’s floors. When I changed my career it was an unusual thing to do but I was happy doing it because I knew exactly what I wanted. The people who have supported me in that sense are such an inspiration. Somebody told me that it’s better to be at the bottom of a ladder you want to be on rather than half-way up a ladder you don’t, and although that sounds daunting it was the realism of the situation that I found myself in. Something had to change.” 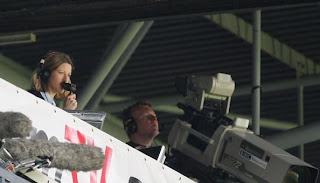 Jacqui in her usual commentating spot for Radio Five Live

Jacqui’s persistence and determination paid dividends. Her first job in radio was at BBC Radio Leeds, and worked for BBC West Midlands and BBC London 94.9 before her big break at Five Live came in 2005. There she became the first female commentator, following the 2005 UEFA Women’s Championship.

“I have never felt out of my depth. I have been scared stiff though! I’m not sure if that’s the same thing as being out of your depth because you still have to back yourself. You still think I’m here for a reason, I have worked my way up and I have started from scratch.

I have looked around and thought oh my goodness. When I was on the gantry at Anfield on my second Match of the Day I just thought ‘this is absolutely fantastic’. I couldn’t believe I was doing it.” 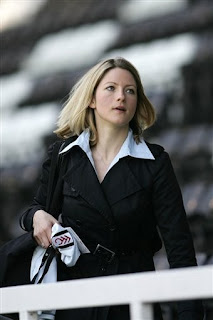 Jacqui’s debut on Match of the Day is the moment when she turned into a hot topic. Her first commentary, on the match between Fulham and Blackburn Rovers on 21st April 2007 provoked the mass response and backlash from mostly male viewers who were unprepared to hearing a female voice on a traditionally male-dominated flagship programme.

“Radio-wise I didn’t have any problems; people have always treated me perfectly fine. I just got on with the job. It was only when Match of the Day came along that it suddenly became a really big issue and everybody had an opinion on it.
I found it quite extraordinary at the time. But you just have to accept it and move on. I think whenever you get anybody doing something for the first time it’s going to cause some kind of interest. I just didn’t quite expect the level of interest.

But I am so happy doing what I’m doing. I absolutely love it. My ambition was to work for Radio Five Live and I’m doing that so why would I want to do anything more? The television work I have done has been great too. I enjoy any different experience. I work full time for Five Live and the occasional Match of the Day. I couldn’t be happier.”

As our interview concludes and I exit the studio (‘Michael Johnson is in here next doing an interview’), Jacqui takes time out to show Footy Pundette around the Five Live studios and News 24 offices at Television Centre. She spends a good extra hour with me offering career advice and introducing various ‘behind the scenes’ faces to me. She’s a total chatterbox, perfect for the radio, but very endearing and incredibly passionate about any subject she broaches. In fact, it is Footy Pundette that has to drag myself away when the time is noticed.

It is apparent just how much of an influence football has on Jacqui’s life. It runs through her veins. Her love of the game resulted in her changing career and taking a huge gamble, one that happily paid off. Many people may have their own opinions on Jacqui and her job, but she is simply doing the job she loves and to the best of her ability. Jacqui has set the precedent for more females to enter the male-dominated arena of football commentary, it remains to be seen if the backlash she has received has put others of venturing down the same career path.