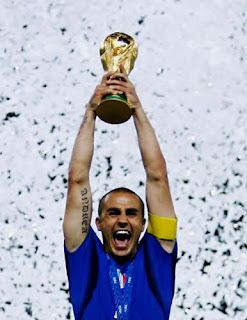 Yes I know, I am sick of hearing City being referred to as a 'project', but that word has been mentioned again today with regards to World Cup winner Fabio Cannavaro's next career move.
Gaetano Fedele, Cannavaro's agent, has claimed that the player would like to finish his career with an important project, with City being well and truly in the frame.
"Fabio wants to aim for an important project as he nears the end of his career, one that I would call phenomenal," Fedele stated.
City, Tottenham and AC Milan are all in the picture, but with Cannanavo apparently ruling out a move to an Italian or American club, the rumour mill begins to churn once again with the possibility of the 35 year-old playing for City.