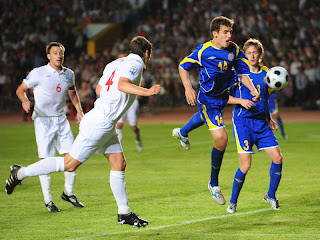 City's new £12 million, £110,000 a week signing Gareth Barry was on the score-sheet for England this evening during a 4-0 win in Kazakhstan.
The new midfield general scored on the 40th minute with a header to give the Three Lions the lead during what was a comfortable victory for Fabio Capello's men. Barry was booked early on which means he will miss England's game against Andorra on Wednesday but he gave an assured performance, encouraging for Mark Hughes and the City faithful.