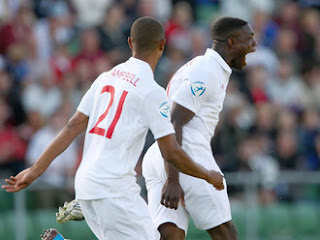 The season may well be over but a threesome of City players are continuing to impress- for England.
Joe Hart, Micah Richards and Nedum Onuoha all starred in England's 2-0 victory against pre-tournament favourites Spain yesterday to clinch a place in the semi-finals of the under-21 European Championship in Gothenburg.
Richards scored on Monday during England's 2-1 victory against Finland but had been a doubt for Thursday's clash after suffering with a niggling knee injury.
Meanwhile, both Elano and Robinho have been featuring for Brazil during the side's Confederations Cup campaign. Elano had two assists during the side's 4-3 victory against Egypt and Robinho scored a goal in the samba side's triumph against the United States. Their final Group B game is against world champions Italy on Sunday.