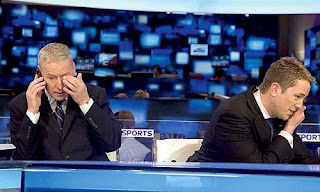 It was always going to be a busy summer for City and so far it hasn't disappointed. Gareth Barry has been the first player to be brought in by Mark Hughes this summer. At the moment they are plenty of names being linked with a move to Eastlands...count how many you have heard: Xabi Alonso, Arjen Robben, Carlos Tevez, Roque Santa Cruz (that one just refuses to go away), Samuel Eto'o, Peter Crouch, Michael Owen, David Villa, Glen Johnson, Lukas Podolski, Joleon Lescott...it's safe to say that the majority of City fans are being driven crazy with the relentless speculation and rumours.

The Carlos Tevez one is definitely interesting. He may relish a move across the city to frustrate Fergie, but with the departure of Ronaldo imminent, will this provide the cash Fergie so desperately needed to retain the Argentinian's services at Old Trafford? Rumours reached fever pitch last week when forums suggested Tevez had completed a medical at City, but nothing has been confirmed so far.

Santa Cruz has been linked with City ever since Hughes arrived at the helm. Big Sam Allardyce threw cold water on the move in January, but could he now be set to cash in? But is Santa Cruz proven enough? Would he be the right choice? The rumours suggest a price tag of £20 million for him- would that be a wise investment or somewhat of a risk?

One thing's for sure- the rumours refuse to die down. They won't go away. Most fans are glued to Sky Sports News and various fan forums, pressing the refresh button on their PC at any given opportunity just to get a whiff of fresh speculation, to see if new names have been suggested or old ones are being confirmed.

My advice? Don't believe the hype. Don't be bought into stories by red-top tabloids. ALWAYS check an 'exclusive transfer news' article for quotes. Check sites like http://www.newsnow.co.uk/ (who update every minute) and http://www.skysports.com/ (a reliable site) to get your summer transfer window fix. Take links with a pinch of salt; generally if a player says they want to move ie. 'X demands move to City', it's just to create hype and a bidding frenzy. More players will be signed, it remains to be seen just which ones will be playing at Eastlands come August.