CAN I HAVE A WORD? SUMMER IN THE CITY...
Well the summer of 2009 has gone exactly as I thought it would at City; a balmy and barmy couple of months full of rumours, speculation and excitement. Finding where to start is a problem in itself.

New website Top of the agenda as it is the freshest in my mind is the launch of City's new website. July 1st sees the culmination of a lot of research and hard work behind the scenes at City to bring fans an all-singing, all-dancing site loaded with information, from Opta-based stats to match highlights. MCFCTV is being scrapped so all interviews and highlights will be absolutely free. Keep your eyes peeled for a site that is set to be the best in football.

New signings With Gareth Barry, Roque Santa Cruz and Stuart Taylor all having signed on the dotted line, the rumour mill continues to churn out a plethora of various players all linked to Eastlands. Samuel Eto'o is one being played out at the moment, along with Carlos Tevez, and speculation with John Terry, Joleon Lescott and Maicon, amongst many others. Any new arrivals will almost certainly mean departures, with a greedy and unhappy Daniel Sturridge, Richard Dunne and Dietmar Hamann likely to be leaving for pastures new.

New shirts City announced linking up with new sponsors Etihad and shirt makers Umbro in deals that will take the club forward in the new era. City worked closely with Umbro to create a strong retro feel for the shirts, with the new home shirt being released on July 18th.

New fixtures Pre-season friendlies with Barnsley (August 1st), Rangers (August 4th or 5th) and Celtic (August 8th) have been announced, along with the South Africa tour. 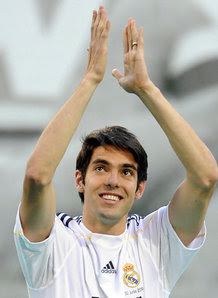 But all the positives still bring negative press. Real Madrid have signed both Kaka and Ronaldo for an almost combined fee of £140 million yet it is City that are ruining football?! How exactly does that work? The club are being ambitious by going for the highest calibre of players and are aware that top players may have to be compensated for their lack of European football, at least for this season. The sport of football is more of a business than ever and it makes good business sense to pay appropriate wage structures to the players that deserve it.

Eto'o for example may choose not to opt for City, but we can't forget that he played and scored in the Champions League final this season. If it is money that fills the void of playing European football for him, then so be it. But there are a lot of hypocrital journalists out there who are both naive and narrow-minded. If City want to go places, it must be with the best players available to help us get there.

Keep logging onto http://www.footypundette.blogspot.com/ for the latest news, views and opinions to do with the blues. I'm always trying to bring the best interviews to my site; former City manager and current Hull City assistant manager Brian Horton and former blue Paul Lake are up next, so keep your eyes peeled for those.