JEFF WHITLEY EXCLUSIVE INTERVIEW
"I was dying. I was trying to get a fix from the alcohol to replace my empty feelings."

Former Manchester City footballer Jeff Whitley’s career was plagued with problems off-the-pitch. In the first of a two-part interview, he speaks to Football Pundette about battling his inner demons and the downsides to being a footballer.

You may not be familiar with Jeff Whitley. The 30 year-old Zambian-born former footballer moved over to England as a child and went on to play for the likes of Wrexham, Manchester City, Sunderland and Cardiff.

But Jeff’s story is one that highlights the darker side of football and brings to light the inevitable perils that accompany a job that earns thousands of pounds and attracts fame.

Jeff had to retire due to an illness that had plagued him throughout his varied career. It took him years to confront his inner demons and for him to actually realise and confess that he was an alcoholic.

“I did mess up the latter stages of my career, but I know I was ill. At the time I didn’t, until I got to the point of holding my hands up and saying ‘I need help’. I was dying. I was in a right mess from trying to get a fix from the alcohol to get rid of the empty feeling that I felt.

“It stemmed from a young age, from losing my parents and travelling around, I didn’t feel settled anywhere. I didn’t know who my friends were. There’s a lot of falseness around football. That was hard to take. I was trying to find out who my true friends were. When I came out of rehab that’s when I noticed who they were.

“Since I stopped playing football I noticed that my phone doesn’t ring as much, because I’m not going to nightclubs, so I don’t need to get people into clubs. People want to be seen where certain crowds are. I’ve noticed that people are not real.”

“I thought it was allowed in football”

“I don’t blame anybody for what I did. I look at it as a massive learning curve and for it not to happen again. Bad things have happened since I’ve been out of rehab and I’ve had to deal with it in a different way than hitting the drink like I would normally do.

“Whether I have a bad day at work or I have an argument with the missus, I’ve always got to keep on top of the addict in me and always know that it doesn’t matter what day it is. When I get up in the morning I am still an addict. I am still a recovering alcoholic. I’ve got to make sure that I keep on top of that.

“That day that I wake up and think ‘Jeff’s okay, Jeff’s sorted. It’s a nice day and he can go out for a drink.’ That’s when my hell all begins again and that’s something I deal with on a daily basis. I have to make sure that I am on top of what’s going on in Jeff’s head. I didn’t know Jeff playing football; I was happy when I was playing but off the pitch I didn’t know who I was. 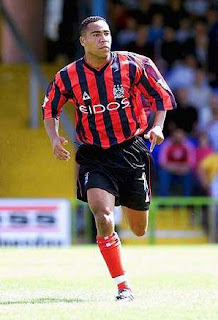 “I thought it was allowed in football. Whether we had a drinking culture or not at Manchester City, the results spoke for themselves but we gelled together and we did go out drinking together as a team. But we were also pulling in the results. We all got on well. We did go out and drink together. I probably drank a lot more than others. I was young and all the players were drinking, but I wanted to be seen with them.

“I had changed my addiction. When I was at school I used to smoke weed so I’d just changed my addiction. Even though I don’t drink and I don’t take drugs and I don’t smoke, I could always get addicted to something else. That’s where I have got to make sure that I am in check of myself. I’m keeping in touch on a regular basis with people who have the same issues as me. I really talk about what’s going on inside me. I don’t need the fancy things in life. If you are not happy and not in love with yourself in a non-egotistical way then you are constantly looking for that fix whether it’s shopping or anything, it’s all a fix to make you feel good.

“Today I feel good. I’m able to sit with myself, to sit by myself whereas before I couldn’t. I’d be on edge. It’s took a lot. Going into rehab (Tony Adams’ Sporting Chance clinic) was tough. I had to talk about things that I’d kept inside me for years. I’d bottled up, stuck in a box and thrown away but things didn’t go away. The loss of my parents: because I was young I thought that I had dealt with it but I probably grieve even more now than I did when I was younger because I know more now. They would be saying now ‘we have our son back, not Jeff the footballer’.

“In football you live in a bubble”

I give my experiences to younger players. We’re working at Wolves at the minute; I don’t get paid but I want to do it. A lot of the younger lads can relate to what I went through and how easy it is to get sucked into that way of life. Addiction doesn’t go away and get easier, it gets worse. It will harm you or it will kill you. I was at the level where I wanted to die and I want to put it across to people that if they carry on at that level, that’s where they could end up.

“I’ve had loads of issues; sex, drugs, drink, family issues. I’ve had a little dabble in gambling. All those could kill you if you don’t keep on top of it and don’t respect it. I was always striving for peace in me. I have that peace today. Don’t get me wrong, I still have my ups and downs and still encounter my challenges. We all get challenged in life.

“In football you live in a bubble. But this is the real world; you have to do things yourself, you have to get by yourself. In football it’s pretty much all done for you. There are a lot of pressures in football and players thrive on pressure. The players that deal with it the best are world class. I now have different priorities. I cherish every day and I thank God for giving me a second chance in life.”

In the second part of the interview next week, Jeff talks about his actual football career and the future.

good to see him stand up and be counted