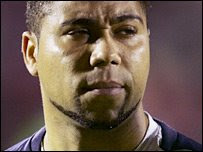 Former Manchester City footballer Jeff Whitley's career was plagued with problems. In the second part of a revealing interview, he speaks to Football Pundette about his time at City and his plans for the future.

Jeff’s career took him across the country, but it started at Manchester City, where he enjoyed 10 years. That’s where his fondest memories lie.

“I did enjoy my time at Sunderland but I’ve been through so much at City. I’d seen a lot of stuff happening, a lot of players coming and going, not to mention managers. To go from being a ball boy and just hoping and praying that one day I might bless that grass, to going and playing on that grass and in that stadium (Maine Road) was a dream come true.

“One of my other dreams was to play at Anfield as I was a Liverpool fan when I was younger. I used to idolise John Barnes. I went from swapping Panini stickers in school to the big stage. To play at Anfield was a dream, as well as Wembley. No matter what has happened to me I can always look back and think ‘you know what Jeff, you have actually lived out some of your dreams.’ There are not many people who can actually say that.”

"We were blessed to play at Wembley"

“It was all new for me- I had gone from being a ball boy to the first team. Alan Ball took me and my brother Jim to his house and we had to pinch ourselves. I looked at Jim and said ‘are we really sat in Ball’s back garden? Is this real?’ On my debut, the guy I was marking scored two goals. I went into the dressing room and thought that my career was over straight away. I was crying. But Ball stuck by me and played me, he showed a lot of loyalty to me and put so much faith in me. 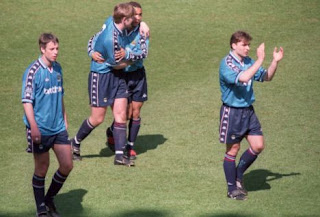 “There was great times and tough times. Getting relegated was absolutely heartbreaking. But I look back at the team, the squad of players that we had and the team spirit in the dressing room. It was unbelievable. Not one player thought that they were bigger than the club. The dressing room banter, as well as at the training ground, was brilliant. As much as we had a laugh, we knew when we had to work hard.

“Even though it was in Division Two, we were blessed to play at Wembley. I was blessed to actually take part in that game; I was at Wrexham at the time on loan and I got called back. I look back and think ‘wow’. There has been so many great players and games that have graced Wembley and for ours to be recognised as one of the best games is amazing.

"Also, getting promoted the season after, I remember playing at Blackburn and getting battered for an hour, they must have hit the post at least five times. But then the goals started flooding in. That season was amazing though; we were going into games planning our goal celebrations. If you look at some of the celebrations from that year we did some daft celebrations, but they were all pre-planned. We were that confident we would score.

“Joe (Royle) and Willie Donachie were brilliant. Joe had put a bid in for me during his time as Everton manager and he came over to me at City and asked why I hadn’t moved to Everton. I simply explained that it had been a childhood dream of mine to play for Manchester City, not for Everton. Joe put up with so much rubbish from me, but he stuck by me throughout my personal problems because he knew that when I was well I would give my all to the game. Neil McNab and Donachie were both so great to me too. Neil drilled it into me that if you don’t work hard, you won’t play. It was as simple as that.

“All my team-mates were great friends to me. The City team that was promoted from Division Two had such a rapport; Michael Brown, Edgy (Richard Edghill), Lee Crooks, Chris Greenacre, Kevin Horlock, Shaun Goater, Nicky Weaver, Gerard Wiekens. It was incredible in the dressing room. Danny Tiatto, Mark Kennedy and Steve Howey, we hung around a lot. I still speak to Steve now. Paul Dickov was such a great man. He helped me out a lot. There was a lot of players that had a good impact on me and a lot that I respected.”

But at City Jeff’s time was up when Kevin Keegan noticed his influence in the dressing room.

“That was due to my own doing. A lot of people at the time told me to calm down with my drinking but obviously I didn’t have a clue and I couldn’t stop. That was one of the reasons why Keegan got rid of me. He thought that I was a big influence on the players in getting them to drink.

“My argument was that they were grown men; if I was going for a drink then it’s up to them whether they come with me. So he got rid of me. I remember that I was in tears in the car just thinking ‘I could have stopped that from happening. I know I messed up there’. But I couldn’t stop. I was devastated knowing that I would never play for the club again. Later on in life I know the problem now. I was completely and utterly gutted. I really wish I would have had a few more seasons at City. I loved the place.

“When I went up to Sunderland, Mick McCarthy brought in a lot of players that the fans had probably never heard of. But he had the respect of the players, he had what I called a healthy fear. I had no problem in speaking to him about anything. Mick gave me a chance. But again, because of my illness, I couldn’t take that chance any further. But he was one of the best managers I’ve ever worked under. He’s pretty direct in what he wants from you- if you don’t work hard for him you don’t play almost. I liked that about him.”

Jeff has now been sober for over 18 months and works in a car showroom in Stockport, Manchester. He has been lucky. His problems illustrate just how easy it is to succumb to the downsides of being a footballer. Thankfully, Jeff is recovering well and offers his help voluntarily to Wolves football club. He advises their young stars on the pitfalls and negative side to football, hoping that they will steer clear. But it is obvious that football has had a huge influence on Jeff’s life and that he looks back with fond, privileged and cherished memories.

"I will get to say sorry"

“Football to me is sheer passion. There are a lot of things you have to sacrifice if you want to hit the grade. Football is a gift and people take it for granted. Millions of people want to be able to play football and if you can then you are blessed. I miss playing football but I’m not going to beat myself up about it.

“I could sit in self-pity all day thinking about all the money I’ve blown and all the people that I’ve hurt. In due time I will get to say sorry to all those people I let down, as that’s part of my recovery. It’s a beautiful world that we live in with beautiful people that have helped me through my suffering. I’m learning so much about myself. I now put into life the best I possibly can.

“It’s knowing who your true friends are and knowing that people who are helping you aren’t doing it to get something, they are doing it from their heart. I don’t want to take it for granted. I cherish my life today. I want to be able to lie on my death-bed and think that I tried to be the best person, the best dad, the best boyfriend, the best at my work. I want to treat people with utter respect and to be able to die in peace knowing that."

Truly a great man and a great player .And as shown such bravery and courage. All the best mate your friend and team mate. Lee crooks.

Truly a great man and a great player .And as shown such bravery and courage. All the best mate your friend and team mate. Lee crooks.