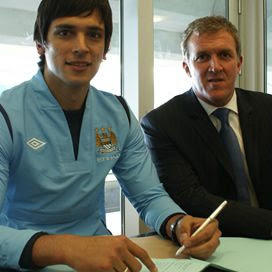 City have unveiled a further two new faces to join Gareth Barry at Eastlands this summer.

Roque Santa Cruz has been a long-term target of Mark Hughes and the City boss finally got his man for £18 million from former club Blackburn Rovers. The 27 year old Paraguay international has signed a four-year deal at City and immediately spoke of his desire to be joined by United-rejecting Carlos Tevez.

"I hope that Tevez could join Manchester City. I heard that there have been conversations about that happening. He would be a really good signing."

The second signing in the same amount of days has been ex-Arsenal goalkeeper Stuart Taylor from Aston Villa. The 28 year old has joined City for an undisclosed fee and has a wealth of experience. He will be working to keep current City number one goalkeeper Shay Given on his toes.

The signing paves the way for England under-21 goalkeeper Joe Hart to move to Birmingham City on loan.