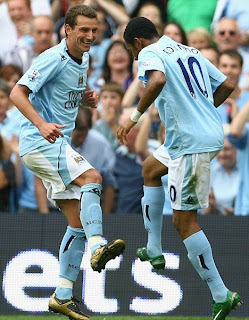 Blumer Elano has moved from City to Turkish side Galatasaray in a deal worth £8 million.

There had been much speculation regarding the Brazilian midfielder’s future but it has been confirmed that Elano moved to the Istanbul outfit last night.

Elano was a popular figure at City, scoring 18 goals in 80 appearances. Perhaps his most memorable goal was the free-kick scored in the 2007/08 season against Newcastle at Eastlands. A lot of fans will be sad to see him go and there’s no doubt fellow countryman Robinho will miss Elano both on and off the pitch.

I wish him the very best of luck for the future.