THE AUDACITY OF GREEDY STURRIDGE 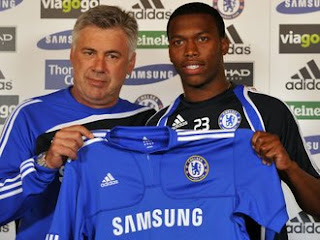 Don't get me wrong, when Daniel Sturridge was at City there was no denying his growing potential. He was rightly earmarked as a hot prospect for the future and was widely described as a 'rough diamond' tipped for big things.

There is also no denying that he became too big for his football boots. His arrogance and cockney persona frustrated fans that were looking forward to seeing Sturridge fulfil his potential at Eastlands. Eventually, with contract talks dragged out due to Sturridge's outrageous and unrealistic wage demands, no compromise was met and the player left for Stamford Bridge.

Even with the amount of money behind City at the moment, the club would have been foolish to bow down to the demands of a precocious Sturridge. Yes he had potential, but it was largely unfulfilled. You only have to look at Stephen Ireland to realise what rewards hard work and determination- he has a bumper wage every week and 46,000 fans referring to him as 'Superman' due to a summer of incredible graft and physical dedication.

So now Sturridge has been unveiled in London with new boss Carlo Ancelotti and he couldn't wait to unleash verbal swipes at his former club to the baying media crowd.

"Manchester City are a completely different club to Chelsea. I have signed for Chelsea and City are in the past. Myself and Mark Hughes didn't have any talks about me leaving City.

"I want to win as many trophies as I can. I am not saying Man City have not got ambitions for the Champions League or for any competition but the main thing for me was to come to Chelsea to better me as a player."

The final insult of all was a direct response by Sturridge to the incessant rumours and speculation linking Chelsea favourite John Terry with a move to City.

"I will become a man here. The likes of John Terry will push me on to become a better player."

Let’s hope you do become a man there Daniel. You could do with growing up fast.