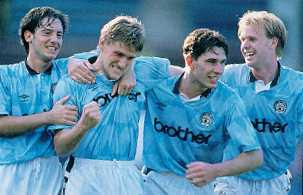 Paul Lake lived out every football fans dream by playing for the team he loves, but his career was cut tragically short by injury. In the final part of an exclusive interview, Paul talks to Football Pundette about what it was like playing in THAT 5-1 victory and how City will be part of the ‘Top Four’ sooner rather than later.

Although Paul’s career was cut terribly short, his time at City was filled with a plethora of fantastic memories, including the time that the blues beat Huddersfield Town 10-1 and, more importantly, the 5-1 derby victory in 1989.

“With the 10-1 game, quite a few of us were passengers. Neil McNab scored a cracking goal with his left foot and then it was just the David White, Tony Adcock, Paul Stewart show. Paul Stewart was the main provider; we just kept it simple, passed it steady and didn’t really get involved. It could have been a lot more than 10 and that game was enjoyable to be a part of but I didn’t really have that much of a part to play it in.

“The 5-1 was my most memorable game. Alongside making my home debut as captain, although I am the shortest captain in City history which saddens me but it is just circumstance there really. But I honestly believe that the skills and the patience of the likes of Ken Barnes, Tony Book and Glyn Pardoe nurtured and galvanised us that day. We came to Maine Road that day so fired up: I saw Andy Hinchcliffe and David White kicking doors and walls and that wasn’t in their nature, they were just so fired up.”

“We never thought for one second that we would get beat”

“We led by example. It took the Kippax spillage for everybody to calm down, but when we came back and scored the first goal there was only ever going to be one result. We never thought for one second that we would get beat. Every time United got going, we would press them down and get the ball. We would force them back- they never got out of their half. We dominated the game. In the second half we had a little blip, that was when Mark Hughes (ironically) scored his goal and they had a couple of chances. There was a slight wobble.

“When you have players like Gary Fleming, who for me on the day was man of the match: he mopped everything up. He was a bit of an unsung hero in that game. He saw things; he read things and those were his main attributes really. Also, I was substituted for my best friend Jason Beckford and he had 10 minutes to experience the magnitude of the game. I was really pleased for him that he experienced it as well.

“All in all it was a fantastic day. I honestly believe it was the skills of Barnes, Book and Pardoe that got us to that day. It was an amazing occasion and we will always have that in history; I was a part of that and I will happily take that to my grave.”

So now Paul looks forward to seeing what will happen in the future at his beloved blues. The takeover has fascinated him as much as it has the fans and he is very excited at what lies ahead at Eastlands, although he would have liked to play amongst the team of 2009 as well as 1989.

“This isn’t me being arrogant, but I know that I could have played today, I felt so confident and strong. I would like to think with being more mature that I could have told the players what it meant to put on the sky blue shirt. I feel like the meaning of that has been lost during the last 10 years of football. The pride and the history of wearing that shirt has been lost somewhere. Without the financial side of it, never in a million years would Robinho have signed for City. When he’s on fire I love watching him play; I used to love watching the likes of Rodney Marsh and Peter Barnes play. I love a bit of skill and flair.”

“My heart belongs to Maine Road”

“I would have loved to have played at the new stadium as part of the new set-up with these world class players. But at the same time, my heart belongs to Maine Road. It’s all I ever knew, all I ever experienced, all I wanted to experience. I never wanted to play for anybody else. We had such great guys in the side too; great players who knew what it meant to play for City, to wear the sky blue shirt and how much it meant to the fans. That two-way entity seems to have been lost. I just wish there was some way, somebody to galvanise the team to make them realise just how much it means to put on that sky blue shirt. Maybe Mark Hughes can get that back.

“I think now that the way City are looking, and we have brought in some quality players like Carlos Tevez and Santa Cruz, who for me is that archetypal centre forward that we have been missing, it’s looking good. There’s now added incentives for the likes of Robinho, Nigel De Jong, Craig Bellamy, Micah Richards, Stevie Ireland, Vincent Kompany but there’s now going to be an expectation from these players, they are going to have to really perform, which is great. We should always keep raising the bar.

“I’m sure Mark Hughes will keep raising the bar and he knows what is expected from him. I like the fact that he is not very mouthy and that he doesn’t jump about and get too animated. He’s calm and controlled. I think over the years it will be a case that people will stand up and notice Hughes and hopefully it will be the case that City will have to try and keep hold of him, rather that City giving him a chance.

“I was speaking to the President of the Hazel Grove branch the other day and he said to me ‘Lakey, I need to see City win something. I don’t really care how we do it. I need us to win a trophy in my lifetime so I can go to my grave a happy man.’ Whether that success is with products of the academy would be an absolute bonus, but it’s going to be tough for these guys to even get a sniff, but they deserve a chance.

“We have got the flair and the ability”

“I think we have a good blend now. I think it will take this season for the real superstars of the world to take notice of City. But now the pressure is on, and it’s a good pressure. For City to be anything like that we have got to be going for the top five this season at the very minimum. The players like Micah and Nedum Onuoha have really got to come to the forefront and step it right up, hold their own week in week out. We have got very good players, but we haven’t got world class players because they haven’t been able to maintain that consistency.

“That’s why we have to go to places like Stoke City, Hull City, Birmingham and Wolves and put them to the sword, that’s where you need your steel to just get the points. We have got a nice balance now of steel and flair, whereas before we didn’t. In all respect to Robinho he is still a young guy and imagine the equivalent of Micah Richards marking you week in week out, somebody bigger and stronger with more muscle than Robinho. Then it takes the quality that you have around you to make it work. So not only does Robinho need to grow up more and be more consistent, but the players around him need to help him out more. But now Barry will help Robinho out immensely and Santa Cruz will be a target man for Robinho to play off with.

“When that consistency comes, I think we will be edging out the likes of Arsenal for that fourth spot, at the very least. I really think we will. I think Aston Villa and Everton won’t be able to compete. That’s the reason that Mark wants Joleon Lescott; we have got the flair, got the ability, but we need to build on that steel to be adamant of consistency. I think when that is accomplished we will be a top four season within a couple of seasons.”

Paul is going to be featuring on a new 95.1FM BBC Radio Manchester show with Ian Cheeseman. 'Blue Tuesday' is a City-based, interactive show starting on Tuesday 18th August at 6-7pm on 95.1 FM. Look out for more details of the show exclusively on http://www.footypundette.blogspot.com