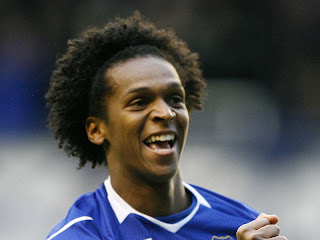 City striker Jo has rejoined Everton on a season-long loan.

The 22 year old Brazilian enjoyed a relatively successful spell at the Toffees during the second half of last season, scoring five goals in 12 league appearances. He was forced to watch David Moyes' F.A. Cup run from the sidelines, having been cup-tied from featuring for City earlier in the competition.

Jo has passed a medical and has now met up with the club's pre-season training camp in Scotland. Everton manager Moyes has admitted that he would struggle to finance a tranfer move for the striker after his initial £18 million move to City from CSKA Moscow.
Meanwhile, Daniel Sturridge has opted to join Chelsea with the fee set to be decided by a tribunal. City refused to meet Sturridge's audacious wage demands, with the youngster yet to have proven his possible potential.