WHY NOBODY CAN BEGRUDGE MANCHESTER CITY THEIR SUCCESS WHEN IT ARRIVES 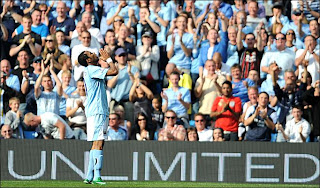 I remember when my love affair with Manchester City began. The Hillsborough tragedy had rocked the world of football and the blue half of Manchester had romped to a 5-1 derby day victory. Alex Ferguson was on the verge of being given the boot and a promising young talent called Paul Lake was being tipped to be the next England captain.
I inherited the blue gene through my older brother Simon. He heavily influenced my decision and I watched my first game in the spring of 1994. The football that City played at the time was exciting, if inconsistent, and featured the likes of Tony Coton, Uwe Rosler and Paul Walsh. After watching my first 90 minutes of action I was instantly hooked.
I didn’t really know what I was getting myself into. Weeks after being allowed to go to my first game, my team was on the wrong end of a 5-0 derby thumping and the bad times began to roll. When City were relegated from the Premier League in 1995, the managerial revolving door began to spin. Going into school became a battleground: a hellish nightmare littered with insults and derogatory remarks about my team. I was faced with ‘fans’ of the likes of Liverpool and United who came down on me hard yet had never been to football games.
The journey at Maine Road continued to spiral out of control at a frenetic pace. Through Asa Hartford, Steve Coppell, Phil Neal and Frank Clark, every season started with renewed optimism and finished with unequivocal disappointment. Yet my loyalty flourished. I remember heading to Maine Road most Saturdays just hoping to see some passion, some fight, perhaps a glimmer of magic from twinkled-toed Georgi Kinkladze. Just something that would offer hope and brighten up an otherwise mundane 90 minutes. 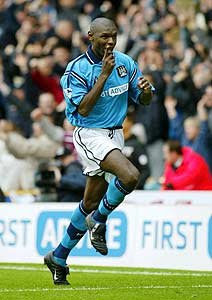 Through Division Two with Joe Royle, the incredible Wembley play-off final of 1999, the unorthodox hero that was Shaun Goater, the ecstasy of returning to the Premier League and the agony of getting relegated yet again, each and every City fan has remained defiant and determined. Kevin Keegan’s cavalier and exciting goal-scoring escapades brought winning ways back to Maine Road before the blues departed for the City of Manchester stadium.

The term roller-coaster ride has never been more appropriate and fitting. Stuart Pearce’s efforts post-Keegan were honourable, if not ultimately successful.The arrival of Sven Goran Eriksson and the promises of Thaksin Shinawatra signalled towards a bright new era, but the Swede’s time in the Eastlands hot-seat was tragically short-lived, for reasons much-debated. Sven was gone and Thaksin’s ethics and morals were being questioned on a daily basis. Then came the takeover...

For a long time, Manchester City have been treated as the circus act of football, with the national press taking great pleasure of lapping up every new ringmaster or poking fun at City’s inability to maintain consistency in both results and managers. The takeover at City has unnerved and sent shock waves through the world of football. A plethora of questions have been reoccurring throughout the media tirade. How dare ‘little’ City attempt to buy the likes of Kaka and John Terry? Who do they think they are? Just because they have an endless pot of gold and are willing to offer astronomical wages, who are they to think they can buy their route to success, despite their lack of European football this season?

The fact is, football is a business, whether we like it or not. It seems quite acceptable that the likes of Chelsea and Real Madrid can offer huge transfer deals and inflated wages, but when City partake in the practise they are seen to be ‘ruining football’. It is ambition: even being in the market to sign such big name players is showing how ambitious the club has become and where Sheikh Mansour, Garry Cook and Mark Hughes want the club to be within football.

Are fans of football really naive enough to think that any club can realistically break into the Top Four in the Premier League without financial aid? It’s about time that the order was shaken up and the predictability of the European spots was challenged and encouraged. I think the reason to the backlash against City can be posed by a simple question: why City? Well, why not? I’m sure if it would have been Fulham or Forest their fans would be delighted and excited at what the future could hold.

As a fan, there have been utterly dismal times. There have been times where I have been forced into questioning both my sanity and my loyalty but throughout I have kept a vigil, hoping against hope that my loyalty throughout the lows will eventually be rewarded. But there have been highs, littered with the good humour and spirit of the blue army. Being a City fan is rooted in loyalty: it’s about backing your team through the good and bad. It’s not thinking twice about renewing your season ticket despite relegation; turning up come rain or shine. Loyalty is something inspired when things aren’t as good as they should be, yet celebrated when your team’s the most in-form side in the Premier League.

City will inevitably encounter glory fans, success invites them in droves. But the real City fans who have been there through the turmoil and the triumph and come out smiling as ever will be aware of what a journey it has been- and it’s only just beginning. Who knows what the future may hold, but it surely won’t be long before the tide will begin to turn, and people will have to take us seriously as a prominent force. People should embrace change with optimism and hope and salute the ambition and tenacity of a club determined to make its mark on football.