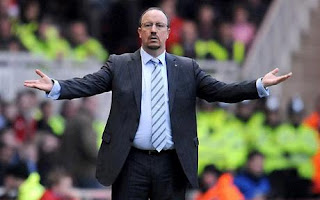 Ah Rafa Benitez. The Spaniard is clearly feeling a tad threatened by the competition he will be facing from the blue half of Manchester this season so he's spoken out protesting against the open chequebook that City have been using this summer.

First this week we had Harry Redknapp bemoaning the fact that Mark Hughes had snapped up both Roque Santa Cruz and Gareth Barry before Spurs even had a chance to compete (he admitted they can't compete financially of course), and now Rafa. Speaking out against City's expenditure is so in trend right now it should feature in Twitter's top 10 topics. It's becoming tedious and boring.

If you read between the lines of some of Benitez's quotes, it's clear that he is showing as little respect to both Hughes and City as possible.

"We did go back again for Barry, but as I said. it is all about money, money, money. It is as simple as that." Football is a business, what do you expect?

"City have signed a lot of good players, but that is no guarantee they will win anything. But it will be interesting to see what happens next season. Whatever happens, experience is more important and we feel that we have that to be in the top positions." Interesting to see, so he is certainly curious as to what City's spending could lead to, is that the Spaniard's indirect way of actually regarding Hughes' team as a threat?

The spending will continue. Both the Samuel Eto'o and Carlos Tevez situations remain unresolved, the results of which could bring yet more tirades of moaning and jealousy from rival managers who only wish they had a golden pot of cash to play with. You had your takeover Benitez, it isn't anybody's fault that they don't speak to each other and grant you an infinite money wand to wave around.