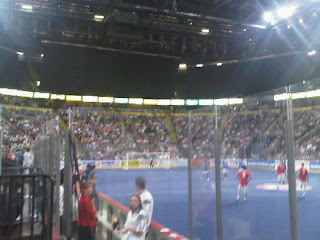 Saturday 25th July saw the ever-popular Masters tournament return to the Manchester Evening News arena. Six of the North-West teams turned up to do battle- one of those being the reigning champions, Manchester City. I went backstage to see how the ‘old boys’ were feeling and to get their opinions on what is happening at the club they once proudly played for.
The City line-up was as follows: Dale Belford (last-minute stand in for the injured Eike Immel), Paul Simpson, Keith Curle, Alan Kernaghan, Ian Brightwell, Peter Beagrie, Nicky Summerbee, Mike Sheron and Carl Griffiths. Georgi Kinkladze was lined up to play but unfortunately couldn’t get a visa sorted out, which was a disappointment.
The boys seemed really excited to be back in the sky blues shirts and, although it was a light-hearted affair, still had that competitive streak.
Nicky Summerbee: “It’s good actually to be back involved in football. I haven’t played for about three years and I don’t keep myself in the best of shape. But I’m excited about it. The main thing for me is seeing all of the old lads: the players I used to play with at City and against who were at United, Blackburn and Burnley. It’s good, it’s exciting.”

Ian Brightwell: “It is great being back involved. I think this is my fourth or fifth year at the Masters and I really enjoy the occasion. It’s great to see the other teams here and lots of old, familiar faces. Some are older than others! But it is great fun actually kicking the ball about again.
”I’m not involved football-wise with anything at the moment. I did a spell of coaching at Port Vale for a few years, but now I’m focusing on a property company that I’m involved in.”
Paul Simpson: “I’m looking forward to it. It’s great to be back in amongst some old team-mates. I think we’re all looking forward to it; it’s always the same when you come back. We all just want to get started and we are looking forward to getting on. It’s a lot less stressful than management!” 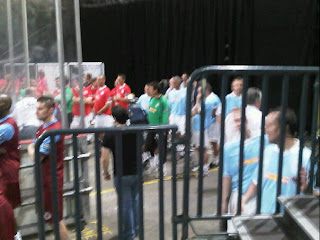 The City boys were up against Oldham Athletic in their first game- and lost comprehensively 3-0. Their title defence was well and truly at stake and it was down to a derby match, against arch rivals United, to restore pride and try to progress further in the competition.

City's Masters played well. Glimpses of Beagrie’s magic and Simpson’s tenacity were on show. Goals from Sheron, Summerbee, Brightwell and Simpson secured a 4-3 victory, but wasn’t enough to see the boys go further in the tournament. Brightwell’s goal, a sweet chip over United goal-keeper Fraser Digby following good link-up work from Summerbee, was the pick of the bunch. 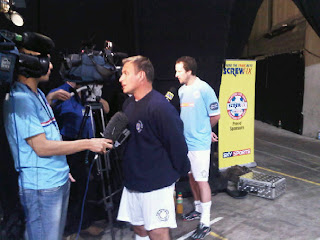 Despite the defeat, the boys seemed to have a lot of fun catching up with some familiar faces and between matches kept busy either talking to opposition players (Summerbee and Brightwell) or practising for the next game pitch-side (Curle and Sheron did that the most) But they also had time to speak to Football Pundette about what they think about the takeover at their former club. Did they think that City have got what it takes to be a top four success?

Nicky Summerbee: “I still get down to City when I can. I went about four or five times last season but will definitely be going there more this season. I am very excited about the whole thing at City at the minute to be honest. I think it could be City’s turn, certainly over the next two or three years. We should start to get a couple of trophies in.”

Ian Brightwell: “City have always been my first team, I supported them as a kid. I was so lucky to play for them in the first team line-up so I always follow their progress. It’s great to see what’s happening there at the moment. A lot of people are having a go saying that money can’t buy you success, but if they buy the right players and the manager gets the right blend, there’s no reason we can’t go on to win the Premier League. I wouldn’t say it would be in the next couple of years, but certainly in the long-term. If the investment keeps coming in, City will definitely be up there in the top four.

Paul Simpson: “There are massive changes going on at City and I am sure the amount of players they have got coming in will take a while to bed in. But they got a very, very good young manager there. He has got the experience even though he is still a young fella and they have made some tremendous signings. It all looks good for them at the moment.”

Finally...a view from a player who has played for both City and United, Andrei Kanchelskis. The Russian spoke broken English but didn’t hold back in his opinions.

“I only played for City for a short time. I played at United for four years and I always had great times there. It was a great team with great fans and my heart still belongs there.

“City now have a lot of money and some good players, the potential is there. But United still remain the best team in England, it will be difficult for City despite the money to compete with the better teams in the Premier League. Maybe in 10 years time or so they might have a chance. We will see.”