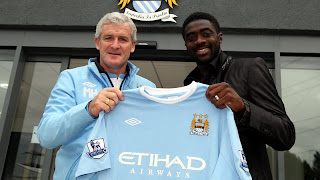 City have made their sixth summer signing by capturing the services of Kolo Toure from Arsenal.
The defender, 28, has agreed a four-year deal with the transfer fee rumoured to be around £16 million. Toure joins former Arsenal team-mate Emmanuel Adebayor in the dressing-room and is looking forward to the challenge that lies ahead.
“The time was right for a new challenge and I am still at an age where I feel I am at my peak and will play my best football.
“For me it was time to move but only for the right club and I feel that Manchester City is that club. The ambition here is clear to see and is big. Everyone knows this club is moving and that is really, really important.”
Toure’s signing was announced on the same day that fellow City defender Nedum Onuoha penned a new five-year contract. The England under-21 star was quick to praise the Eastland’s club’s ambition and plans.
“I am really, really happy. Hopefully it will be the start of another good five years for me and for the club. This is a season that we will be looking right towards the top of the table.
“Who knows how far the club can go. If you look back five years who would have expected the club to be in the position it is in now. We feel anything is possible.”