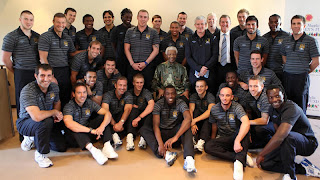 Here's a picture of the City boys meeting up with none other than Nelson Mandela during their pre-season visit to South Africa.

The team gave Nelson a City shirt with '91' on the back, in reference to the former presidents 91st birthday which he celebrated last week. Mark Hughes was honoured to meet Mandela.

"He's an inspirational figure and none of us that were lucky enough to meet him will forget today."

Great picture from the camp!

In other news, City strikers Ched Evans and Felipe Caicedo have departed the City of Manchester Stadium. Evans has moved to Sheffield United in a deal worth £3 million and Caicedo is heading to Sporting Lisbon on a season-long loan.