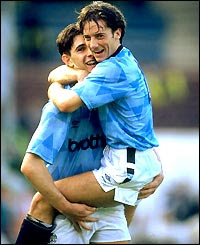 Paul Lake lived out every football fans dream by playing for the team he loves, but his career was cut tragically short by injury. In the first part of an exclusive interview, Lake talks to Football Pundette about how he almost died for the City cause and what playing for his team really meant to him.

As a City fan and journalist, I had always been interested in interviewing Paul Lake. His career was emerging just as my love for the blues was flourishing. But that career was brought to a shocking and painfully short end just as it should have been blossoming, when Paul suffered a cruciate knee injury during the 1990/91 season. He was 22.

Paul had been tipped for the very top by fans, pundits and managers alike. In this three-part, in-depth interview I wanted to get to the heart and soul of the former City player and offer an insight into Paul’s career and opinions, starting from the very beginning.

“I played football from the age of six with my elder brothers. They were good footballers; I played with them and got kicked around, I got bullied a lot with their friends who were a lot older than me. I was playing above my own age and holding my own. As I got to the age of 10 I had the City scouts watching me as well as Manchester United and Tottenham Hotspur scouts.

“I’d been taken to see City from a young age by our milkman. My brother, Michael, and I would alternate weeks when we would go and watch the game as he used to have a spare season ticket. So Albert would take either Michael or myself. We would go and see City at Maine Road and the smells, the sounds, Helen’s bell. We would bring a cushion with us and park in the same place just off Kippax Street. You just get hooked and it becomes a big part of your life. The first time I saw City I was completely and utterly hooked. From that point on that was all I wanted to do- play for City.

“I couldn’t wait for my turn”

“We got a little taster of playing at Maine Road when we were playing for the reserves on the first team pitch. I played when I was just 16 for the reserves. I was nervous, apprehensive but very, very excited as well. Once I had a taste of it and we got used to it we trained with the first team guys and played with the youth team. I did particularly well with the youth team; we won the Youth Cup final. Stevie Redmond had already played for the first team and then slowly but surely Whitey (David White), Reddo (Steve Redmond) and Brightwell (Ian Brightwell) were all getting a taste of it. I couldn’t wait for my turn.

“When I made my home debut, against Luton Town, I wanted to do so well that the nerves got the better of me. I didn’t particularly enjoy the occasion because I didn’t want to let anybody down. I scored but didn’t play particularly well and we drew 1-1. After that I sat down and calmed myself down.

“It’s hard to describe. As you came down the astro turf going down the tunnel and it opens up and the first thing that hits you is the Kippax stand, there’s not a feeling like it. People talk about the adrenaline being that high and that exciting, it’s like the guys that used to be in the Wars on D-day, it is that kind of feeling of euphoria and excitement. That was my D-day really. Every time I pulled on that sky blue shirt it meant that much to me. From being eight years of age and a huge City fan that is all I wanted to do. So as you can appreciate, playing for the youth team, playing for the reserves and the first team, and coming out and hearing the roar from the Kippax, there’s not a feeling that can match it.

“We all talk about having families, wives, wedding days, children born and that’s a different entity altogether. The most exciting thing that has ever happened to me in my lifetime was pulling on that sky blue shirt, walking down the tunnel at Maine Road and playing for Manchester City. Soon later, that 5-1 game encapsulated all of those feelings in one and it has taken years later to watch the DVDs of the games for me to realise what I was part of and how much it meant.

“It would be very difficult for me to pick out which player was the best that I played alongside because every player brought little bits extra to the table. Steve Redmond was so assured, so supremely confident and didn’t seem to put a foot wrong. Andy Hinchcliffe had a left foot that could rewire the back of a television he was that good. Whitey’s pace, his constant threat and positivity; we almost had a telepathic relationship as I would be able to find David, knew where we wanted it and knew where he would be. Brightwell was everywhere: he would play in any position, give his all and never let anyone down. He was the most athletic and competitive guy I had ever played with.

“Then you have got Ian Scott; he was talented, left foot, right foot, he could pass a ball anywhere. He had that controlling effect in the middle of the field. Paul Moulden, he was the best player I had seen in the 18-yard box: his low sense of gravity, his movement, his aggression, his strength and his sharpness over five yards was the reason why he was so good. My best friend Jason Beckford never fulfilled his potential. He had great skill and on his day could actually win a game by himself.

“If you think of all of those players combined, I can honestly say I would pick individual parts out of every player that would make the perfect footballer, but I couldn’t pick out one that was the best. They were all of an even keel.”

In 1988, when City played Leicester City at Maine Road, Paul almost died on the pitch when he swallowed his tongue. It was the quick-thinking actions of the club’s doctor that saved his life that day and Paul relived the memory of that day when he was sent a copy of the game to watch.

“I went into a convulsive state”

“Well I was sent the video of the game to watch, macabre as it may sound. My idea of what happened that day was pretty much how I saw the game unfold. Basically what happened was Roy Bailey (City’s former physiotherapist) had treated Trevor Morley in the corner of the pitch near the North Stand. City had a corner in front of the Platt Lane end: it was a bizarre corner, similar to the ones that United used to work where Ryan Giggs would pass it to the edge of the box for Paul Scholes to volley in.

“So this corner was pinged out to the edge of the box, I think it was just a badly taken corner. I went to head the ball and Gordon Ramsey head-butted my temple. It was the way that I landed. I didn’t move, that’s when one or two players were a little bit concerned and started shouting for Bailey’s help. It was the fans that were shouting Roy to come for me. That’s when I went into a convulsive state and started to twitch uncontrollably. At that point Redmond began to scream and Neil McNab turned away because he couldn’t watch. Eventually the club doctor managed to come down from sitting next to Peter Swales in the Main Stand. Him and Roy got me onto my side and pulled out my tongue.

“One of the weirdest things was afterwards. I was in the first aid room under the stairs at Maine Road and I woke up to three females crying. Me first words were “who has died?” The immediate reply was “nearly you”. It was one of the girls from upstairs, my then-girlfriend and my mum, they were all in tears. Ironically, as soon as I fell to the ground, my mum began shouting and screaming saying that I had swallowed my tongue. The incident set a precedent and, as a consequence, it was made legal that doctors had to be pitch-side at all games. Out of that horrible incident came something positive.

“Another irony was that Trevor Morley scored a complete hat-trick that day: with his left foot, right foot and header. But all of the press coverage was towards me and how I was recovering, with not even a mention to Trevor’s first hat-trick. So he sent me a card in hospital thanking me for ruining his day!”

In the second part of my interview, Paul talks about what it was like to be involved in City’s famous 5-1 derby day victory at Maine Road and opens up about the turmoil behind his injury nightmare.